It was another much needed weekend full of relaxation and mishaps.

On Saturday, I went to the mall area so I could kill some time and just look around. It’s about a twenty-five minute walk from where I live, so I decided to walk there. No big purchases, but I did buy a really neat book about Uruguay since it is virtually impossible to find any kind of visitors manual back in the states. Lots of really helpful and cool information!

It was finally time to head home, but it was already dark out, so I figured I’d take the bus. I had taken a bus from the area back home before, and although I couldn’t remember the exact number of the bus, I got on one that was going toward where I needed to be. However, this bus went in the complete opposite direction of where I needed to go. It ended up driving all around an area in Montevideo called Ciudad Vieja which is known for being a dangerous part of the city at night. Since I really had no idea where I was, I ended up staying on and riding the bus for about an hour until it went through a safer, more familiar part of town, and at that point I just decided to get off and walk the rest of the way. Safe and sound!

On Sunday, I went to the Feria de Tristán Narvaja with some other exchange students. It’s basically a huge outdoor market that takes of the streets of an entire neighborhood. Lots of people, lots of thing to look at. You could probably find anything you could think of at the market such as silverware, souvenirs, produce, shampoo, computer parts, washing machines, clothing, books, really anything. However, a lot of pick-pocketing goes on at such markets, so it’s really important to keep your bags nearby. For that reason, it definitely would not have been a good idea to whip out my phone or camera to take pictures, because that would have made me look like an easy tourist target. I did snap one picture, but it really doesn’t do the market any justice. This was toward the end of the day when things were winding down: 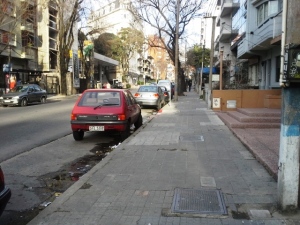 I finally learned how laundry works in Uruguay. There is no washer or dryer where I live, and apparently coin operated laundromats don’t really exist in much of South America. If you need clothing washed, you must call a local company and then they will come pick up your clothes, take them to be cleaned, and then return them to you the next day. Definitely a concept that is very, very different. I might actually prefer doing my own laundry to this method, but nevertheless, when in Montevideo, do as the Uruguayans do.

Back to class today! I started off the day with my first Adventure Tourism class, and it sounds like it will be a really fun but challenging course. Every two weeks the class meets in an outdoor location, and throughout the semester we will be having workshops on canoeing, repelling, camping, mountain biking, canopy (not sure exactly what it’s called, but it’s when you tie two ropes between trees and one is for you to stand on the the other to hold on to to get between two points), and how to use tools such as a compass, GPS, and topographic map. Each session is not only learning about the equipment needed for each activity, but also the safety aspects and then actually doing it. At the end of October, our class will go on a three-day camping trip where we will apply everything we learned about each activity. For me, this class is a good way to get out and try new things and see more of Uruguay. This will definitely be a very challenging but very exciting course.

Other than that, it was just a typical school day! I was at the university from 8:45am-6pm today, so I am more than ready to turn on my bed warmer and get some sleep.