Despite the rain, thunder, and lightning, it has been nice having a weekend to relax after last week’s adventure.

As you may or may not know, fútbol (or as the Americans call it, “soccer”) is extremely popular in Uruguay. Last night, the Uruguayan fútbol team was playing an away game against Peru as part of the qualifying matches for the 2014 World Cup. Around 10:30pm, I began to hear loud cheering coming from outside, so I looked out the window from the apartment and saw this: 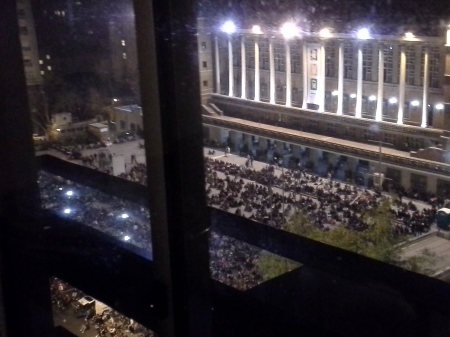 I asked what was going on, and apparently when there is a fútbol game, a large screen is set up at the Intendencia (a large government building) so people can gather and watch the game. It was pretty obvious from the reactions of the crowd what was going on during the game: loud boos when something unfavorable occurred and thunderous cheering when Uruguay scored. Of course, Uruguay won.

Speaking of fútbol, I bought a ticket to go to the next game! Uruguay will be playing Colombia on Tuesday in Montevideo in another World Cup qualifying match. I am really excited to experience this extremely important aspect of Uruguayan culture. If you are able to watch the game on Tuesday, be sure to cheer for Uruguay!

Getting back to today, it rained all day with the occasional thunder and lightning. Being from Washington, rain really is not a big deal to me nor does it ever really put a damper (get it?) on my plans. In Uruguay, however, the world seems to stop when it rains. There were very few people out on the street and far less cars on the road. I guess the rain is a good excuse to stay in bed all day!

Supposedly, the storm will pass by tonight. I sure hope so, because tomorrow I would like to go to the feria (street market) and look for some Uruguay gear to wear to the game on Tuesday. For now, I will take of advantage of the time I have to relax before tests start popping up…